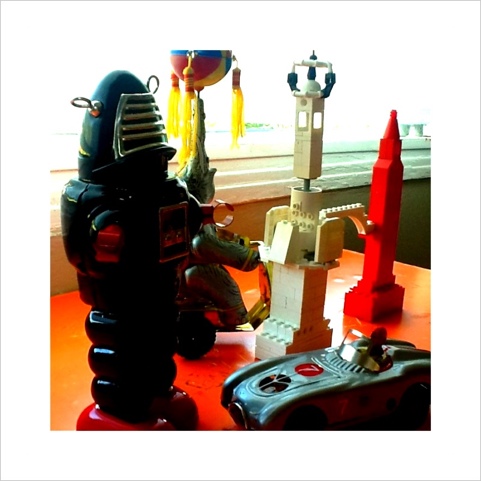 some of the vintage style tin toys I bought for the shop. i know, the merchandise is eclectic so far but all little things i love and that you won’t find in my town. i bought some of these toys maybe 15 years ago on market st. in san francisco at a drug store. the same elephant riding a bicycle, tassels spin as he moves forward once the key is turned. mindless charm. there was a spaceship (?) that came in a box with russian writing on it. up until fairly recently the toys were still made by hand in russia and other far off countries. an american company started reproducing some of them and that’s where I was able to buy them. the only toy I have left from 15 years ago is a motorcycle with a side car. a black helmeted man drives it with a young blue eyed boy in the passenger seat. a few years later I met my husband, who rode a motorcycle. the little blue eyed boy came along a short while after that.