dancing in the street 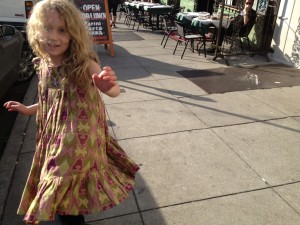 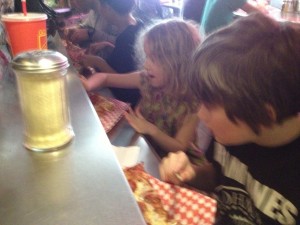 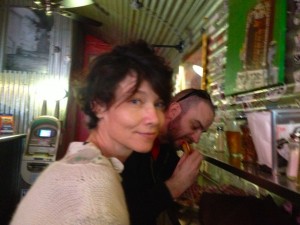 around noon my husband announced we were driving to san francisco for lunch yesterday.  the weather was beautiful.  hey, it’s almost hot at 59 degrees right?  we piled both kids and the dog in the truck and got to golden boy pizza in just under 2 hrs with everyone starving to death.  lunch was great.  jeremy and i have a long history with this place.  they even have a picture on the fridge of a baby marcello between us, there at the counter.  when i was pregnant with marcello i could eat 3 or 4 slices at a time.  put it this way, my husband can eat maybe 3 slices and he’s 6’3.  golden boy is in my favorite part of north beach, just off grant ave.  i worked at the hippy grocery store there for 3 years and introduced my sister to her future husband, who owned the restaurant next door.  i used to go into his restaurant at lunch time, order a burger and talk to him about boys i was crazy about but who did not love me.  i was almost 30!  sad.  around that time i started bartending at the purple onion down on broadway.  in the sense i poured beers from a keg behind a bar.  the purple onion was huge in the 60s as a comedy club but in the early 90s it had another heyday as the fuzz club featuring underground garage bands.  it was insanely fun.  everyone from the demolition dollrods to the dandy warhols played there.  occasionally tom (the owner and my boyfriend of sorts) was able to book a band from the 60s that would blow everyone’s minds, like davie allen.  the most bizarre and exciting night was when sky saxon of the seeds came to town with his harem.  the seeds’ big hit was “pushing too hard” and it’s great.  the club was packed with little hipsters all there to see what sky was going to do.  well he not only put on a show, so did the girls.  they seemed to take over the club, running through the audience and generally stirring things up.  he may have been an old guy by then but he was hands down the coolest thing in there and everyone knew it.  he had magic.  it was one of many crazy nights in north beach.  i really didn’t realize what a little scene that was until it was gone.